Now that we're done with our long, painful math review, let's see how we can use all that knowledge to actually make some beautiful images! In our vector calculus lecture, we discussed a number of different ways to think about and compute the gradient, summarized in the vector calculus slides. But for simple quantities like lengths and angles there is often a much easier, geometric way to come up with the gradient that doesn't any involve limits or partial derivatives or anything like that. We basically have to ask ourselves: what's the quickest way to make this quantity change? Here's one nice example.

If we dip a loop of wire in soapy water, we get a soap film that takes on all sorts of interesting shapes, depending on the shape of the wire: 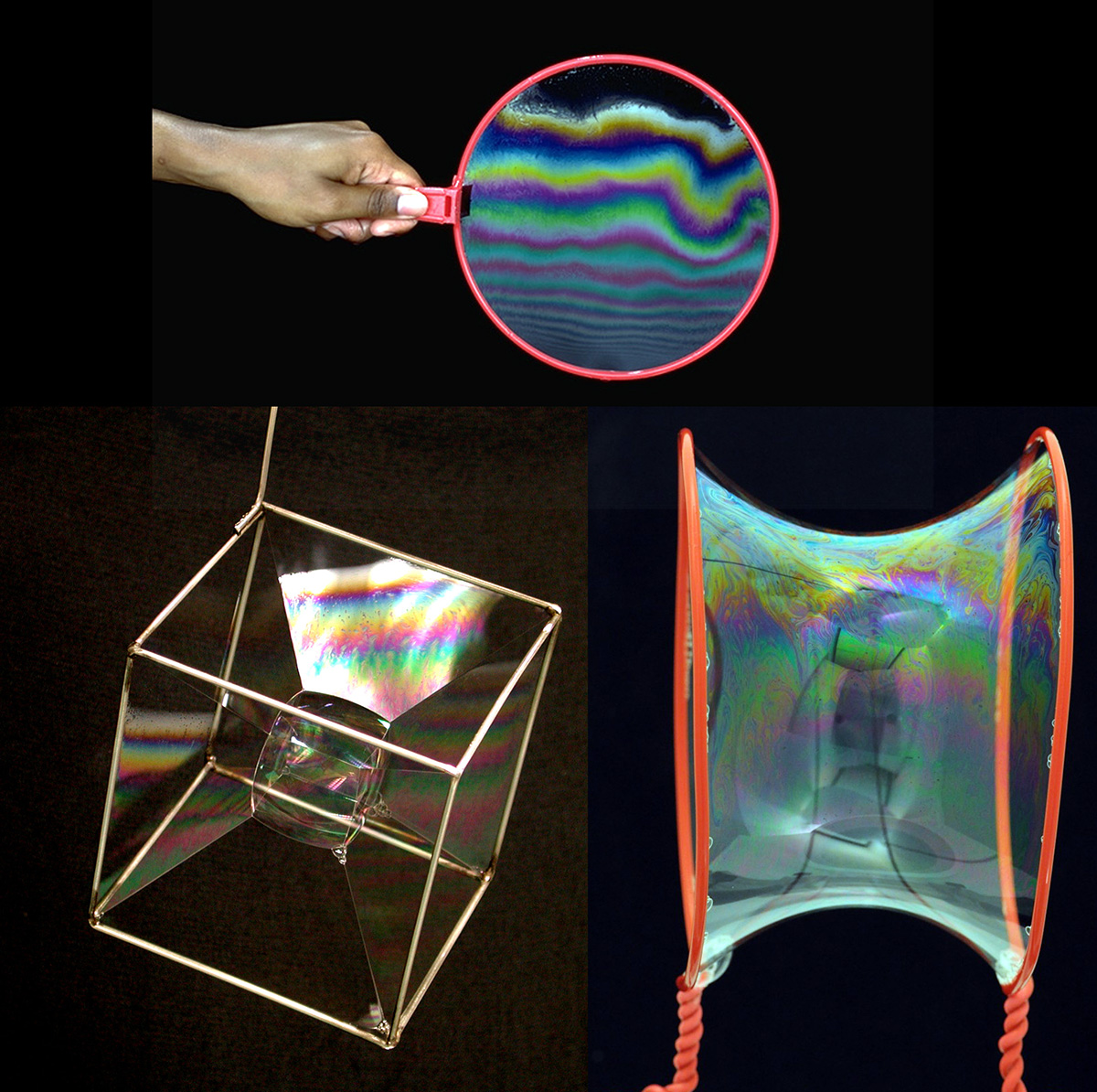 How can we compute the shape of a soap film? One important observation about soap bubbles is that they try to minimize their total area; for this reason, they are often modeled as so-called minimal surfaces. Computationally, we might approximate a surface as a collection of triangles glued together along their edges: 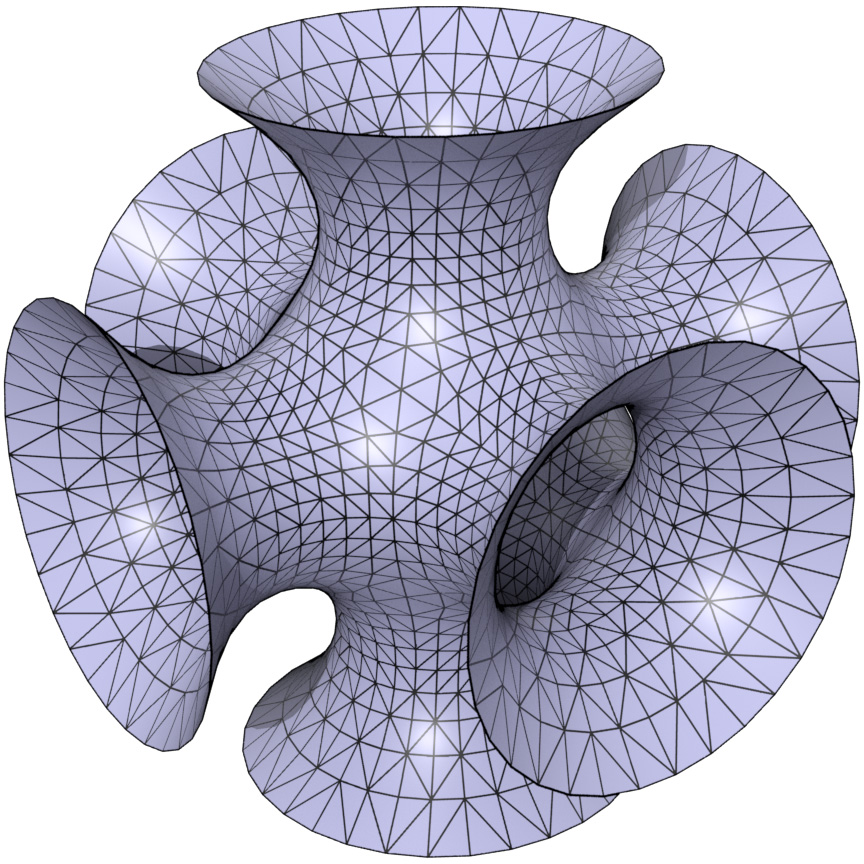 But how do we push the surface toward one that has minimal area? One idea is to visit each vertex of the mesh, and move it in the direction that most rapidly reduces the surface area. Since the surface is made of triangles, our whole problem actually boils down to one simple question: for a given vertex of a triangle, how do we move it so that the triangle area shrinks as fast as possible? In other words, what is the gradient of area with respect to the position of some vertex?

Consider a triangle with vertices p, q, and r. For now you can assume these vertices live in 2D. 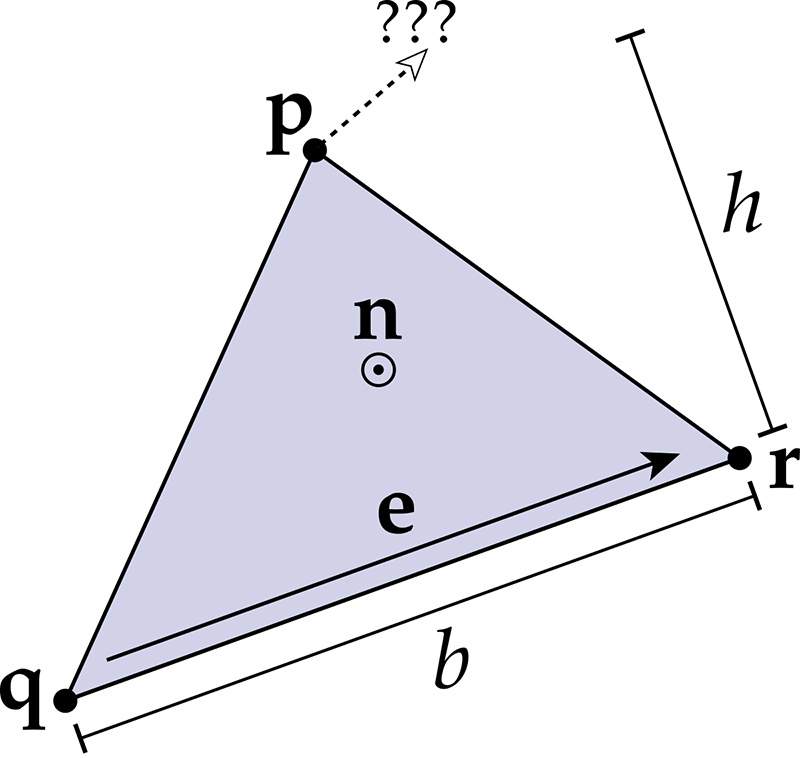 Recall that the area of a triangle is given by

i.e., the area A is one-half the base length b times the height h.

Suppose we're only allowed to move vertex p. What direction should we it so that area shrinks as quickly as possible (corresponding to the collapsing of our soap film)? To make this question easier, we can break it down into a three smaller sub-questions.

[Note: The answers you give below should not involve any coordinate calculations, cross products, determinants, or matrices. You should be able to give all the answers using simple geometric arguments like, "it gets bigger if you move it in (some direction) because of (some reason)."]

The quiz is now over. (Phew!) At this point, believe it or not, you basically know how to write some code that produces soap bubbles. The high-level procedure is

The only thing you're missing, perhaps, is some knowledge of how to work with mesh data structures---and how to draw the result on the screen! We'll take a look at all of these questions in lectures throughout the semester.